YOUNG ACADEMICS BLOG POSTS
ABOUT THE YA AND BLOG
CALL FOR CONTRIBUTIONS AND GUIDELINES
Categories
Tags
Authors
Teams
Archives
More
More
Print
YA Central Beyond planning Dissemination, outreach, communication Sustainability and resilience Planning, city, and society Academia, research quality and assessment Territory, landscape, land Sustainable consumption Conferences Nature Community engagement Public transport
YA Coordination Team
250 Hits
1 Comment
Read time: 4-5 minutes
2018 was the year which generated the most traffic on the blog: 13,000 views and 9,300 visitors for 29 published posts. The posts covered such diverse themes as territorial governance, active mobility, sustainable food systems, development, and public participation, planning higher education and career prospects, among others.
The three posts published in 2018 with the most views were:The three posts that generated the most views in 2018 (but were published earlier):
Following are summaries of all blog posts published in 2018, starting with occasional and one-off contributors.
Pfr Simin Davoudi shared personal reflections about the 13th AESOP Heads of Schools meeting, hosted by Newcastle University on 20 April 2018. The meeting reviewed opportunities and challenges to a holistic and integrated university programmes, including risks of a shallow interdisciplinarity, and the related epistemological and cultural crisis that may affect the discipline as a whole. Simin Davoudi concluded her post by sharing her belief that:


The real impetus for energising the debate and digging deep into planning’s underlying epistemological, methodological and ethical issues lies in the AESOP Young Academic community. That is where we need to look for novel and imaginative ideas, going forward. 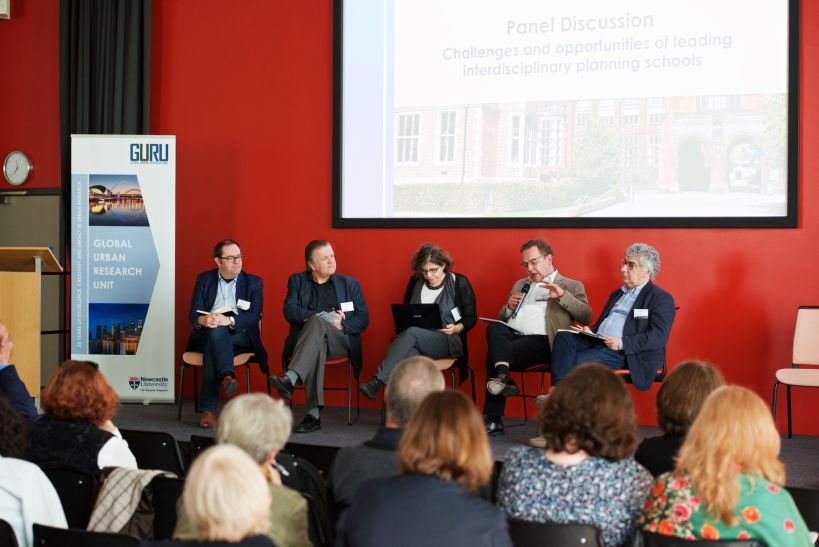 The pros and cons of interdisciplinarity in planning higher education - training graduates as jacks of all trades or specialised experts? Picture credit: Simin Davoudi, Panel discussion about the challenges and opportunities of leading interdisciplinary planning schools.
Enzo Falco and Reinout Kleinhans shared a summary of their paper about the value of online platforms for participatory spatial planning. Besides a much needed categorisation and review of existing tools, they also highlight growing opportunities for their use compared to just five years ago, as well as persistent challenges.
Anke Brons wrote about inclusive sustainable diets as a means of supporting and celebrating ethnic diversity. Her research shows that the inherent cultural component of food practices by Syrian migrants in the Netherlands illustrates diverging views about what constitutes 'sustainability', even as people favour seasonality, allotment gardening, and consumption of local produce.
Ksenija Banovac provides a critical historical analysis of the use of European development targets, from the Treaty of Rome in 1956 to the EU2020 strategy. Notably, European supervision of markets across member states have provided potentially contradictory impetus toward social and territorial cohesion on the one hand, and (distorted) competition on the other hand, underpinned by the conundrum of standardised development goals for all regions.
Kedar Uttam contributed two posts about the importance of environmental and cultural impact assessment. Based on in-depth expert interviews conducted in Sweden, Kedar provides key considerations for green and sustainable public procurement in infrastructure construction to safeguard strong sustainability goals. Drawing from his engagement with local communities in Mangalore in South India, Kedar also makes a strong case for greater integration of cultural dimensions in environmental impact assessments.
Clemens de Olde reviewed recent changes in planning policy as a possible sign of changing planning culture in Flanders. with a clear potential to counter spatial fragmentation. He also critically analysed the new Spatial Policy Plan for Flanders, especially the intent to completely stop building in open space by 2040, which was popularly coined as 'concrete stop'.
Jo Ellis provided an engaging, humorous and topical account the detrimental effects of the urban built environment on human well-being, framed around public health, car-dependency, and unsatisfactory opportunities for active mobility in the current UK planning system. We are literally building ourselves fat.
And now from regular contributors.
Aysegul Can wrote critically and constructively about ongoing regeneration in the neighbourhood of Tarlabasi in Istanbul. Her three posts provided a portrait and introduction to the historical neighbourhood, processes of stigmatisation of the local population, and a consideration of alternative planning perspectives to the current situation.
Chandrima Mukhopadhyay wrote about the relationship between Johor Bahru and Singapore, and questions whether the conurbation should be reconsidered a South-East Asian megaregion in its own right, and discusses various criteria that can support this claim.
Mahak Agrawal provides a prolific and engaging series of critical posts about the challenges for inclusive and sustainable planning in India. She investigates the colonial heritage of planning for modern sanitation and current challenges in eradicating open defecation across India, which are due the complexity and geographical differentiation of the issue in different parts of India. She also writes about housing in India and government attitudes toward it, arguing for a holistic approach that goes beyond 'affordable' housing for all to one that is also 'adequate' for its occupiers. By reviewing gender-based inequalities in the planning profession in India, Mahak advocates for truly equal and equitable pay and equality of employment opportunities and also provides advice to graduates. In another post, she warns against one-size-fits-all approaches to physical development in modern-day India.
Tiziana Susca provided the fifth part to Urban Heat Islands for beginners, focusing on its impacts and mitigation strategies.
Ian Babelon wrote about current trends in participatory budgeting in France and provided a comprehensive list of resources for public participation in spatial planning. He also discussed opportunities for the current growth of social entreprise in French to tackle social and environmental problems simultaneously. He also provided theoretical insight and reflections about the place of cyborgs in contemporary place-making processes, from the level of individuals to wider technological trends.

A call for blog posts was issued for contributions about slow academia and the neoliberal university. The call is still open! 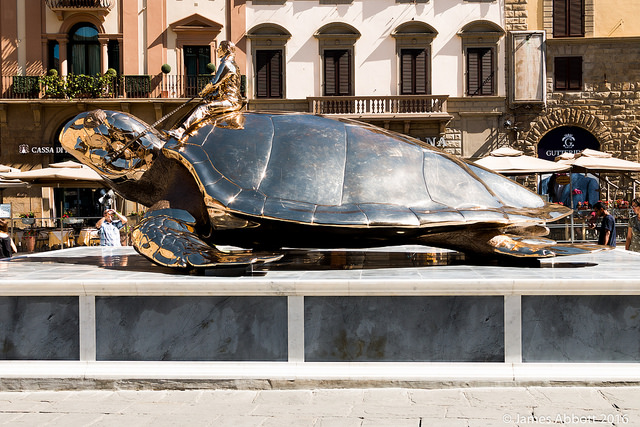 Slow academia: Riding the turtle instead of the hare? The above sculpture, called “Searching for Utopia”, is by Belgian artist Jan Fabre, and was exhibited Plaza della Signoria in Florence (see an artistic commentary here) Picture credit: Florence 2016-07-16 044-LR, by James Abbott on Flickr, CC Attribution 2.0 Generic
Another call for blog posts entitled ' Looking for AESOP' seeks to generate reflective posts about the ways in which the work of AESOP and YA members has been influenced by the values from Ancient Greek philosophers, authors, artists, poets and scientists, from theories of local democracy to territorial governance and moral values. This call is also permanently open!