Development planning in post-independence India: Where did we go wrong? What can we do about it?

The term ‘Development‘ (physical development) may be defined as – carrying out engineering, building, mining, quarrying and other such works in/on/under land. This is also called material change in the use of any building or land. Development may also refer to change of land use. In some countries, demolition is also considered to be a form of development.  Contemporary theory defines development as synonymous to ‘urbanization’ and economic growth, but the question that arises is whether or not economic growth is sufficient for human development. Amartya Sen and other scholars advocate a holistic form of development that supports the capabilities of humans and society. He propagates the idea of development which extends beyond economic growth to include better living conditions (safe drinking water, education, housing, etc.) for the population that is usually overlooked (i.e. the poor category unable to pay the taxes), with the larger goal of improving its capabilities.

Post-independence, the vision for development of India by Jawaharlal Nehru, the first prime minister of Independent India, was founded in industrialization and large scale infrastructure development. Dams were believed as temples of modern India. Urban centres were projected as engines of economic growth. In 1986, Charles Correa spearheaded the National Commission on Urbanisation and projected urban centres of the country as generators of economic momentum, famously known as GEMs.

Much before the large scale industrialisation took place, the majority of the Indian population lived in the countryside working as farmers. Over 70 per cent of the country’s population lived in its villages and employed almost half of the workforce, as evident from records maintained by the Office or Registrar General of India at the Census of India office. With the Independent India formulating a vision for future development of India based on urban centres, public finance, public policies and planning efforts moved towards these GEMs as well. People, particularly males, left their farms to move to these ‘employment-rich’ cities of the time in search of jobs and a better standard of living.  While some came to build cities and stayed, many others developed a seasonal mobility – travelling in the lean agricultural seasons to cities and moving back to their home village in the sowing and harvesting seasons.

As a cumulative effect of this perpetual focus on urban centres and increasing rural-to-urban migration, demand for basic amenities of food, clothing and shelter increased exponentially, well beyond the carrying capacity of the cities and financial or technical capacities of local authorities. But the population was increasing and urban centers were expanding in numbers and in terms of spatial extent. India’s urbanisation level increased from mere 11. 4 per cent in 1947 to over 33.4 per cent in 2017, as per Census of India estimations. This large scale urbanisation was accompanied with large scale destruction of natural resources: large scale deforestation to create spaces for humans to inhabit, places for leisure, networks connecting different areas, air, water, noise pollution etc.  Crux of the discussion is that urbanization never was and never will be an isolated process. It has multiplier effects, usually in sync with environmental degradation.  It is aggravated by perpetual rural to urban migration as well as urban to urban migration in Indian cities.

The systemic increase in population and its demand for resources, beyond the capacity of a city, has resulted in over a third of urban populations living in poor conditions, which means: lacking a pucca (house), clean water and sanitation services; being forced to take up petty jobs, and lacking the security of regular income to support life; and facing recurrent eviction by force. This inability of cities to accommodate a large portion of society has led to the growth of slums and bastis. However, let’s not forget that these slum dwellers or informal workers are not just poor, they are the very hands or children of workers which may have built the city, or are themselves providing fruits and vegetables at nearby markets on a daily basis, or for that matter cleaning the homes and offices where the more well-to-dos spend over 80 per cent of their daily time. Also, not all rural to urban migrants are poor. A small fraction is the educated middle class section which possesses skills to get absorbed in formal employment. 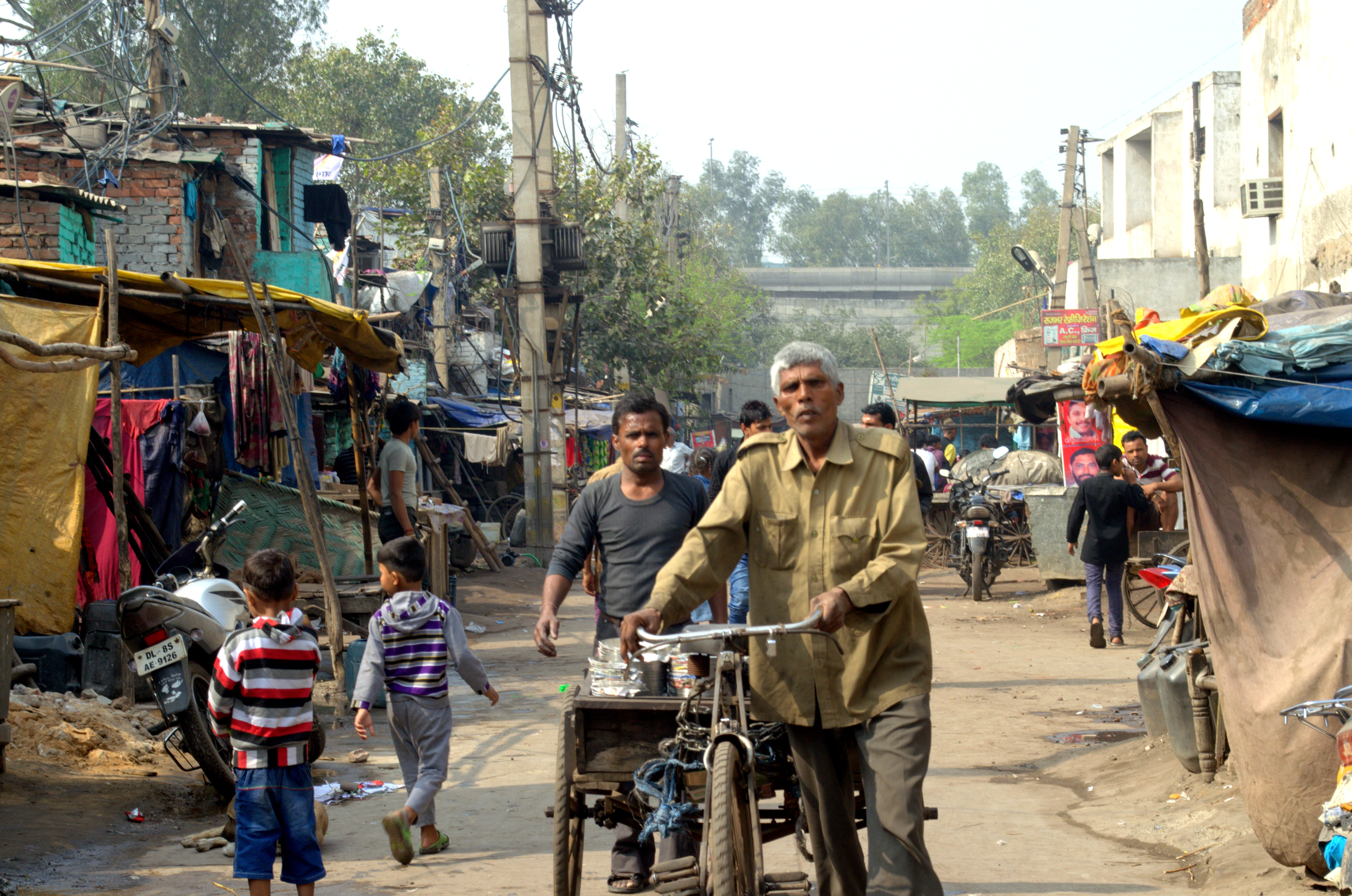 File Photo:  A slum cluster at Prem Bari bridge, Wazirpur Industrial Area, NCT of Delhi, India – the settlement came up to serve the industrial area in 1960s. It has witnessed evictions and court stay orders with political support in 1990s. However, it continues to occupy a linear parcel of land along the railways, lacking access to adequate water and safe sanitation, or, for that matter, an all-weather roof for most of the units they call as home. (Image by Author, 2017)

In general, however, the amount of labor available on the market is increasing more than the opportunities available. The Census of India estimates annual rural to urban migration of 10 million. This migration is primarily guided by social and economic development of the in- and out-migration node. But then where does planning fit into all this?

The answer (or solution?) is – how does urban planning accommodate its population, native as well as migratory? Does it need to serve only the tax payers? Do the poor always have to occupy the crevices?

There is much talk and measures to strive for inclusive development. But what really happens on the ground? Can one blame the government? Do the poor want to live in poverty? The answer and solution is not that simple.

First, concerning the poor: no, they do not want to live in poverty. First generation or the first flow of workers that migrated to city, is educating their children and sending them to seek respectable employment. While the second generation who is often educated but in Hindi medium schools, is teaching its children English, for all respectable employment are considered to require fluency in English as a basic skill. Some manage to escape the poverty trap while many continue to live (or die) in it.

Second, concerns with the other end of the spectrum, which includes policy makers and administrators. Is it their fault that the poor live in disgraceful conditions? The answer is no. There are several instances where affordable housing is provided by the government and allocated to the poor by the administrators, but in over 90 per cent of cases it has been found that they leave the newly allocated units for more familiar dilapidated housing. How come? Poor communities have often established years of work-home relationships and networks or have adapted to using formerly-available limited space that was earlier available, which are difficult to replicate in the new locations of affordable housing. This is where urban planning steps in: where does one allocate space for them in a landscape where land prices determine the type of development that may come upon it? Are we as planners only concerned with simple allocation of land in our age-old system of land use allocations, or do we look into the demand for retaining work-home -place relationships and provision of basic services?

Gautam Bhan (TEDIndia, 2017) believes that a basti is not a problem, it’s a solution. One cannot provide as many affordable houses as worked out from simple mathematics of housing demand. Basti is not a illegal squatter on public or private land by workers who have built the city or help in its functioning. Running a bulldozer over them is not the solution. These citizens have as much right to the city as a tax payers does. The former might not be paying property tax or income tax, but do pay indirect taxes. If they are paying a fraction of tax, then why is it an issue if they occupy less than 10 per cent of a city’s land while accommodating 20 to 60 per cent of urban population in an Indian city? Why is it that they have inhabited on a parcel of land for 10 to 40 years but notified illegal a few days before eviction? One of the most practical explanation for this is – the parcel which was earlier a no man’s land becomes a pot of gold for proposed development.

Coming back to the question – what can a planner do to balance this scale of development and make it inclusive? Does one look at New York’s public housing and rent control, which has been able to accommodate workers from around the States and the world in areas surrounded by elite and high priced property? Or do we look for innovative ideas that developed within the country, like the Barefoot Movement (TEDGlobal, 2011) founded by Sanjit ‘Bunker’ Roy who built country’s first college for the illiterate with the help of the illiterates. Sanjit Roy has been propagating and working on the vision of helping rural illiterate communities to become self-sufficient in and around India, thence reducing the need for rural to urban migration.
The answer is not simple and definitely not a one solution fits all. A country is defined by its people and the people most affected are the ones who lack the ability to pay taxes, i.e. the poor section of society. We as planners need to plan our spaces and policy in a manner that is inclusive of all.

What use of European development targets?
Changing Planning Culture in Flanders, third time ...

Bus Stations as a transition zone to deal with safety

Participatory budgeting made in France

A motto to revisit and revise - EQUAL PAY. EQUITABLE PAY

[…] and equality of employment opportunities and also provides advice to graduates. In another post, she warns against one-size-fits-all approaches to physical development in modern-day […]