Spatial planning is all about putting things on the map: existing spaces and places, as well as spaces and places to come. Yet how much of mapping for spatial planning actually engages the supposed beneficiaries of planning? This post considers online mapping technologies that can be easily used by non-experts, particularly online mapping surveys for public engagement. 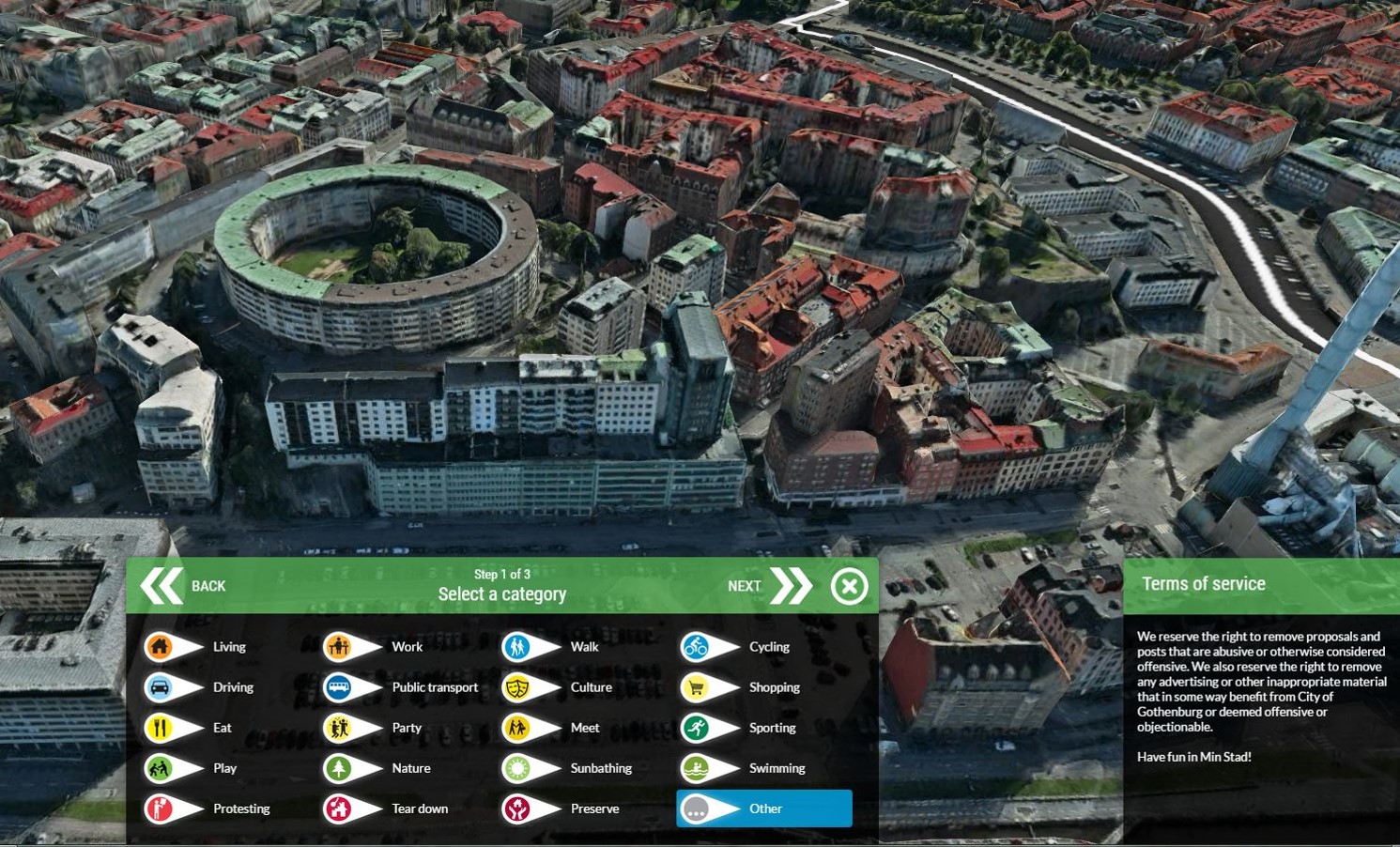 The main stake for online participatory mapping is to allow virtually anyone to participate in mapping places of interest, as well as places of disinterest that would benefit from upgrading or transformation of some sort. Insodoing, online participatory mapping enables the crowds of non-expert to express contrasting interests and views about places and spaces. This can make for variegated maps that bring to the fore the inner tensions of dwelling together and sharing spaces. Such was the case in an online mapping survey carried out as background public consultation for the Helsinki 2050 master plan, where two distinct groups of participants emerged: those supporting urban infill and those preferring the status-quo. This ability of online mapping surveys to address contentious planning issues is simultaneously a major challenge and benefit of online participatory mapping for public engagement. Participatory mapping in the form of Public Participation GIS (PPGIS) can enable local communities to put their issues on the map, facilitate resource management, stand up for their rights, and/or speak the same language as planners (e.g. see the PPGIS.net development projects).

Geographical Information Systems (GIS) are the backbone of spatial plans. Yet their use remains limited to those who have had adequate training, typically people who need to work with GIS on a daily basis. Traditional GIS is opening up though. QGIS is a powerful, open-source alternative to proprietary GIS software marketed by firms such as ESRI. Because it is open-source, QGIS is often used for different forms of participatory action research (e.g. here) as is the open-source, and crowdsourced Open Street Map (see for example the extreme citizen science projects at UCL, and humanitarian OSM). QGIS and OSM projects are however typically expert led, or requires solid basic training for which many people may not have sufficient time, patience or spatial skills. Open Street Map, although crowdsourced, is mostly updated by a minority of keen mappers, for a majority of passive users (i.e. that do not contribute content, as is often the case with many “wikis”). Furthermore, maps made with QGIS do not provide shared, instantaneous interactivity to many simultaneous online users, in the way that online mapping survey software do. Even much PPGIS can require the intervention or leadership of mapping experts.

With Web 2.0 functionalities, cloud-based data storage, and increasingly interoperable geospatial data (i.e. compatibility across data formats and visualisation platforms), participatory mapping technologies are now more powerful than ever. A former post on the blog highlights some of these online mapping tools, such as Carto (formerly CartoDB), Fulcrum or Harvard University’s free, intuitive map-making software World Map. A great Open Source online software is Geojson.io: you can make great maps on the fly, draw on them, put place markers, add simple attributes to the added features, share the maps with others, and export the maps in multiple formats, or directly to Github for easy collaboration on projects. ESRI’s Story Maps allow users to create beautiful and simple picture-based maps and narratives, but are otherwise limited.

Online mapping surveys, in the form of web-based Public Participation GIS, have been used in many places the world over to engage people in spatial planning, particularly in cities. They are meant to be easy to use for virtually anyone acquainted with Google Maps or Bing Maps. Although a lot of online mapping survey services enable ordinary people to participate in mapping, and some source codes for software are Open Source, most of them remain license-based (Software as a Service –SaaS). Most existing online mapping services have emerged since the 2010s, so this is a rather new phenomenon for spatial planning.  Here are some examples.

The research-based software Maptionnaire is one of the most famous PPGIS to have been applied in many planning contexts, mostly in Finland, but also internationally. It has received extensive coverage in the academic literature, as most people running the company are (or were until recently) researchers at Aalto University. Over time, it has been used to engage thousands of urban residents, and has also been customised to engage target groups in urban planning (e.g. children and older residents).

This software has been used in many French cities, including Lille, Marseille, Strasbourg, as well as smaller councils/municipalities. Of late, it has been used to engage local residents in choosing alternative routes for a new fast train line linking Paris and Normandy. Feel free to play with the demo for Paris (in French). Given its range of functionalities (e.g. like/dislike comments, view who contributes what, see places in google street view etc., commenting options) and unique user interface, the tool deserves to be used in other countries too.

Based in Australia, Social Pinpoint tool has been used in many different planning contexts, especially in smaller councils. The range of projects is quite impressive, and the user interface can provide a lot of background information to users and enable significant interactivity for users.

While the above have mostly been used in urban planning, Mapping for Change has been used for more diverse uses, including making community maps (e.g. comprehensive maps of local community assets, local climate change mitigation initiatives) as well as citizen science projects (e.g. monitoring air pollution in London). Like Social Pinpoint, this online mapping survey software has mostly been used to engage smaller communities and neighbourhoods, or by small local councils and boroughs. Check out their wide range of completed and current projects.

As online GIS is growing more powerful, 3D and 4D (3D over time) GIS are becoming increasingly available on the web, thanks to WebGL technology. Making use of Open Street Map 3D, CityPlanner is a software that, at its best, can function as a 3D planning platform and urban social media. The main flagship project for public engagement, and best all-bar-none identified by myself so far, is MinStad, used and augmented by the City of Gothenburg. It allows to visualise planning proposals in 3D, view historical pictures of the city, and read other users’ personal narratives about their life in the city. Most importantly, it allows users to make comments and submit ideas in 2D (e.g. cycle routes, areas) and 3D (blocks, volumes), as well as demolish features in the 3D environment (I haven’t managed to make that work though…). You can then share comments on social media, as you would with Social Pinpoint or Carticipe. CityPlanner is also used internally by many local councils in Sweden for project management and collaboration, in a similar manner as ESRI CityEngine.

The above online mapping surveys enable to engage urban residents in a powerful way that complements more traditional methods for public engagement. While this is a great achievement in itself, the future lies in increased interoperability between all digital platforms, with a significant potential to link all stages, aspects, and spatial scales of place-making processes. Terms such as “Urban Information Systems” will likely best encapsulate the potentialities of the digital participatory planning platforms of the future, which will connect and stretch well beyond either online mapping surveys or professional planning, construction and design tools, and enable an interconnected synergy between these. The shape of such “Urban Information Systems” to come will be the theme of my next post.

[…] Project (Advanced Decision Support for Smart Governance) and recently published, and expands the blog post published by Ian Babelon last year.  We look specifically at platforms which allow for […]

[…] Planning for Real® is UK version of the American charrette (i.e. participatory design workshop). The participatory design method rests on making a physical 3D model of the area being planned, followed by a prioritisation and ranking of ideas and needs generated by participants. A landmark precursor of online participatory planning platforms was the web-based Public Participation GIS platform developed by Richard Kingston and colleagues. An online facilitated Planning for Real® session will likely require ingenuity and the use of a complementary collaborative design platform (ideally free and Open Source, for greater accessibility).  Tools such as Mural  or Wireframe can help wireframe conceptual designs, but lack a spatial component. A former post reviews useful participatory mapping tools.  […]

0 Cancel Reply
[…] Planning for Real® is UK version of the American charrette (i.e. participatory design workshop). The participatory design method rests on making a physical 3D model of the area being planned, followed by a prioritisation and ranking of ideas and needs generated by participants. A landmark precursor of online participatory planning platforms was the web-based Public Participation GIS platform developed by Richard Kingston and colleagues. An online facilitated Planning for Real® session will likely require ingenuity and the use of a complementary collaborative design platform (ideally free and Open Source, for greater accessibility).  Tools such as Mural  or Wireframe can help wireframe conceptual designs, but lack a spatial component. A former post reviews useful participatory mapping tools.  […]
Cancel Update Comment

Can you tell us more about this? I'd want to find out more
details.

0 Cancel Reply
Can you tell us more about this? I'd want to find out more details.
Cancel Update Comment

[…] with the most views have been: 12 references for qualitative and mixed methods research; tools for online participatory mapping; the future of PhD students in Italian academia, making the case for publishing only in truly Open […]

0 Cancel Reply
[…] with the most views have been: 12 references for qualitative and mixed methods research; tools for online participatory mapping; the future of PhD students in Italian academia, making the case for publishing only in truly Open […]
Cancel Update Comment
First Page Previous Page 1 Next Page Last Page