Architectural and urban recycling is seen as an economic and pragmatic approach. In an urban fabric that is already congested, rehabilitating a building, or reusing a surface or entire areas (e.g. retrofitting sprawling suburbs) can prevent enlarging the field of urban density, playing an important role in avoiding mobility and transportation problems. Besides, conversion suggests intrinsically extending the life cycle of buildings and urban spaces. Thus, a state of urban temporal continuity would take place, so that the city does not transform, after sixty years or more, into a giant "demolition and reconstruction" worksite. 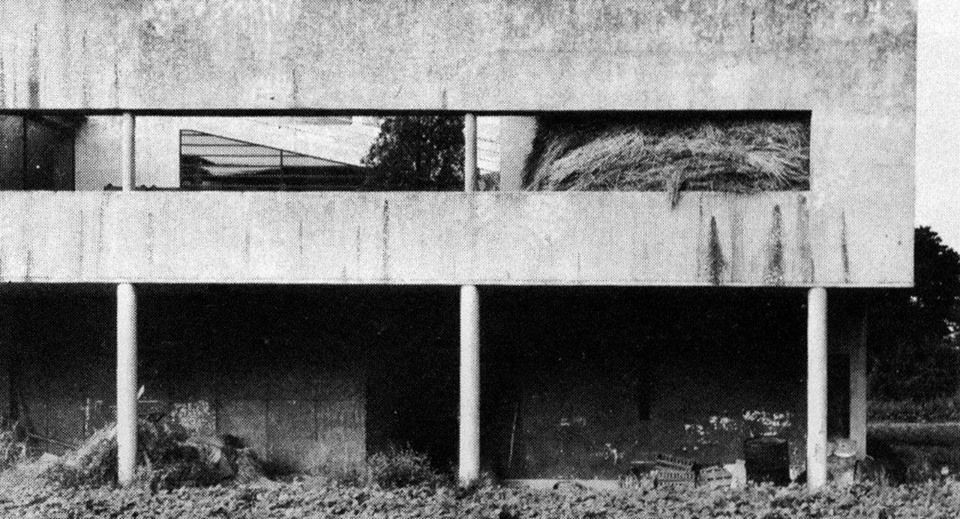 Le Corbusier's Villa Savoye, used as a stable before its restoration in 1985. Picture credit: Rodrigo Sena.

Among the various styles of architectural projects, those that have kept the authenticity of the original building, while showing a vivid touch of contemporaneity, have presented a high aesthetic level and a rich source of inspiration. Between the charm of the antique and the attraction of the contemporary, a harmonious marriage of contrasts, once successful, can only add a new asset to any project.

Certainly, reusing a building or an urban space proposes a huge amount of possibilities. However, the issues and challenges that such a transformation can generate are numerous. These include:

Generally, the study of the surroundings is essential. The purpose of implementing a new function is basically to regain occupancy. So, unless we are considering a temporary use, it is not advantageous to replace the old function into a program which will be briefly abandoned again in the short or medium term.

The choice of the new idea should not be denying the ability of adjusting the project in the geographic and topographic situation. Depending on these physical, tangible factors, many concepts could be operational in the new design. In the case of an architectural transformation. The state of the transformed building should be well examined. Parts of the project may be completely or partly demolished, preserved, or repaired. The location is also crucial. The situation of the project is probably going to dictate many choices regarding the feasibility of the project, the function, the openness/closure of the design, the aesthetics... etc.

If the element to be modified has a certain heritage status, a different procedure should be set. Following the appropriate terms and rules is therefore fundamental to preserve the historical aspect of the space, respecting or even highlighting the history behind that element of the city. That would deeply affect the transforming act in many ways such as the new function, the architectural style, the building materials, the construction techniques

Space recycling is clearly a decision that comes with several challenges, but it surely brings in the end a more resilient outcome and thus a greater satisfaction.

The reconversion of a building admits a certain level of imagination as well as a deep focus on the original cause of transformation. It allows the building/space to adapt to the ever changing  demands and needs of a society in terms of spatiality and programming. Moreover, the conversion can even remain flexible to implement different functions within the available spaces, not necessarily causing any major changes. This projection into the future, going towards other alternatives, can make the contribution of the designer (architect, urbanist, landscaper) more suitable, adequate and effective for society.

This approach also offers a contemporary conceptual advantage. The recycling of buildings and spaces is involved in enriching the urban landscape with an architectural/urban expression which tends to highlight a lucid coexistence between pre-existing forms and those of the present. Any building or urban space would definitely have characteristics of the period of its establishment as well as its transformation or reuse. Since each trace tells a different story, the fusion of the various stories creates an authentic beauty. In addition, each transformation made to these structures and infrastructures, once well thought-out and carefully applied, would absolutely improve their quality.

The loss of function is one of the main factors in the architectural deterioration and urban decay. However, the vacancy of a building or an urban plot does not mark the end. On the contrary, it is highly suggested that it’s nothing but only the end of a chapter that can give way to a new part of the history of that element of the city fabric. Architecturally speaking, when the building cycle is finished and its structure is still solid and recyclable, it can be transformed or restored. We are then assigning a new cycle to it. Where several urban areas and buildings have been abandoned, but the potential for a new cycle still exists, a new life may take place. It goes under the name of architectural and urban recycling. In the case of architectural projects, this intervention may involve the preservation of the general exterior appearance of the building. It may also imply the addition of a new extension besides the modifications to the interior design. The rehabilitation/restoration/renovation process requires taking into consideration the original building while injecting a new function into it. It allows the building not only to persist over time but also to evolve. According to the French architect Nunes Antoine Fréderic "What is sustainable is something which is destined to last but also to become." The destiny lies in the future functions that can a space host. This begs the following considerations: What program can smoothly take place in an existing frame? What functional diagram could do justice to the spatial potential offered by the building or the urban space, while fulfilling the main role of creating a new usage cycle?

Building from scratch consumes more energy than transforming an existing space. Energy consumption will decrease because we can save building materials as it offers the possibility of reinforcing the structure, the infrastructure, the quality of the space as well as the insulation and other climate-resistant factors. Using new techniques of building makes the newly transformed constructions more energy efficient, including through building envelopes and recycled or reclaimed construction materials. In addition, this type of intervention is now part of an urban planning approach, saving land, labor and materials. In other terms, optimising the life cycle of a building can be a more sustainable approach.

In order to draw attention to the problems of buildings demolition, the British architect and academic Fred Scott mentioned in his book On Altering Architecture the story behind La Villa Savoye in Poissy, France. This masterpiece designed by Le Corbusier, summarizing the five points of modern architecture, was on the edge of oblivion. Due to some problems with the roof after the Second World War, the building was abandoned and its life cycle came to an end. Shortly before the order to restore the monument, the municipality of Poissy submitted a request for a demolition permit. With no understanding of the hidden potential of La Villa Savoye, the municipality planned to acquire the land in order to expand the school campus located nearby. Subsequently, the building was finally considered a national monument by the French government. Since that time, the building has been restored and it is open to the public as a museum to be visited and a reminder of the importance of restoration.

Amine Mseddi is an architecture graduate from the National School of Architecture and Urbanism of Tunis, Tunisia. His graduation project was about the revalorization of the brownfields in the city by transformation and reuse. He is currently enrolled as a PhD student at the Faculty of Landscape Architecture and Urbanism at Szent Istvàn University of Budapest. As a continuity to his degree, he is working in his research on the reuse of vacant urban spaces as a sustainable tool to avoid urban decay and support urban regeneration.

The medina as a historic urban landscape

The Power of Sun: A Snapshot of Global Photovoltaic Markets

“Bring back the Royal Arch!” Dealing with the past in Scotland’s independence city.

[…] Architectural and urban recycling: challenges and perspectives by Amine Mseddi […]