Eco-districts and their impacts on clean tech growth

Stockholm is one of the fastest growing cities in Europe, with over one million new residents expected in the Swedish Capital in the next 25 years. The landscape is stunningly beautiful, with many areas like old town where the city’s urban form merges distinctly with Lake Malaren and the inner Baltic waters of Stockholm’s archipelago. But it also faces critical challenges in terms of managing this growth. Just on a general level, the city faces an intense building shortage and current construction forecasts don’t even come close to meeting the demand.

Partly, it’s the combination of these opportunities and challenges that makes Stockholm such an interesting place to conduct research on connections between city planning and sustainable growth. Here at Nordregio, this includes work in the recently completed RE-GREEN project and our ongoing research in the Nordic Working Group on Green Growth – sustainable urban regions.

Stockholm is a Nordic leader in clean tech performance - making it a dominant force in a region that has already established itself as a key player in a global perspective. It comes as no surprise then that Stockholm was named as Europe’s first Green Capital in 2010. But an important component of the Stockholm’s green profile for at least the past 15 years has been eco-district urban development projects. This began with the globally-renowned Hammarby Sjöstad project and it continues with redevelopment of Stockholm Royal Seaport. 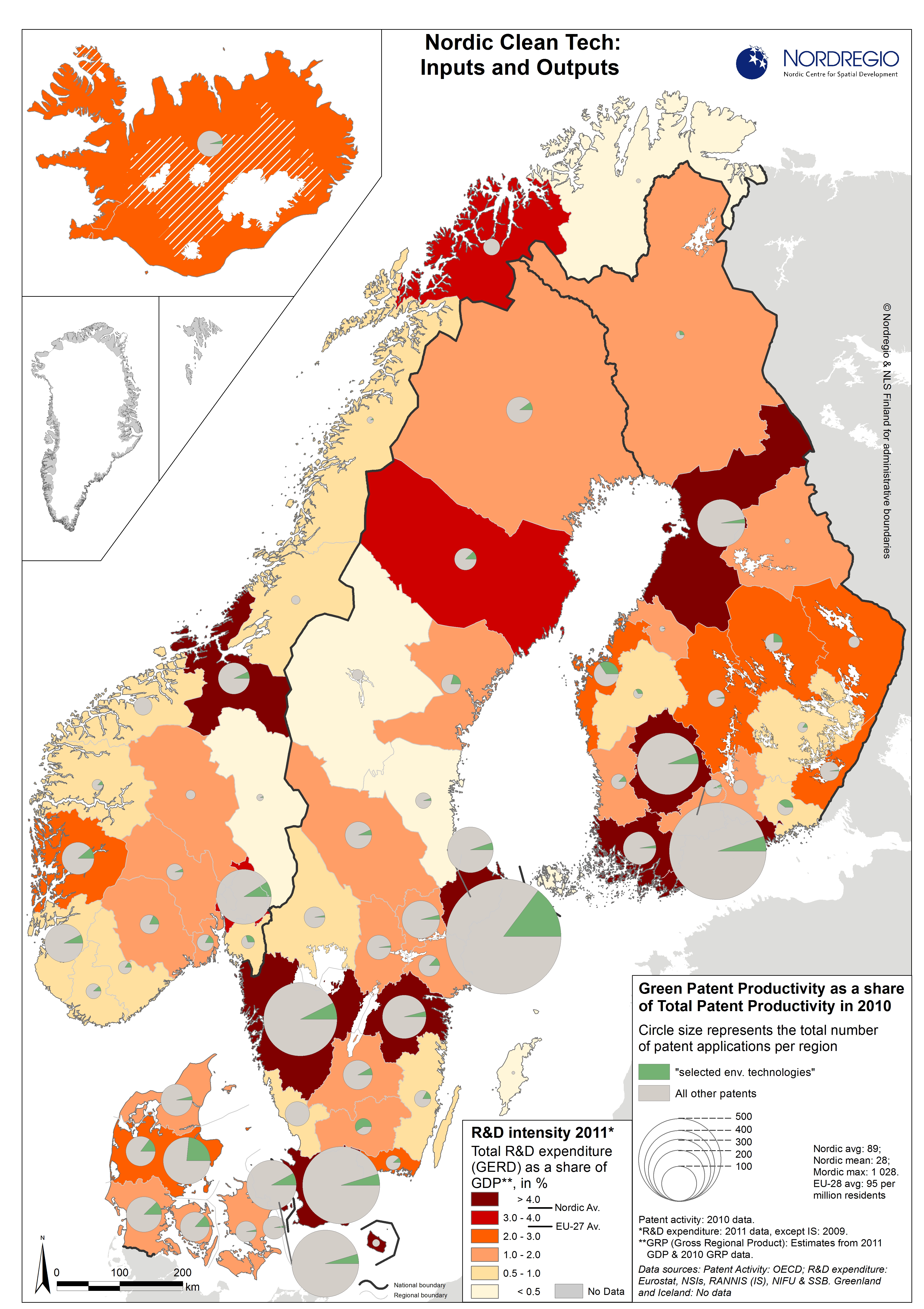 An OECD report from 2013 notes how eco-district urban developments can serve as a showcase and demonstration site for new green building technologies. However, the same report notes that further investigations are needed to analyse their impacts on innovation dynamics and enterprise creativity. As a result, we have focused efforts on tracing how these urban planning projects have (and continue to) support Stockholm’s green profile, and the growth of Stockholm’s clean tech sector in particular.

However, a main challenge of such research is to decipher what elements of urban development fall under a definition of clean tech; and thus, which companies (or parts of companies) should be the target of our research. Are the planning and design consultancies that develop such plans and have a wide portfolio of urban sustainability expertise a part of it? Perhaps. Can we link new technologies in automated waste collection or district energy systems to the clean tech sector? Surely.

We conducted our research as a two-step, iterative, mixed-methods approach. In other words, a rough scoping assessment. We first used the Swedish clean tech network EnviroSweden to identify 44 companies that have their head offices in the Stockholm County and which provide technologies or services that are likely to be attributed to eco-district development. For many of these companies we know for certain that they have had important roles in both the Hammarby Sjöstad and/or Stockholm Royal Seaport project. We then obtained their annual turnover between 2003 and 2012.

The results below show that during the period 2003-2007, gross turnover of these firms was stagnant, even slightly decreasing as the number of companies was steadily increasing. A plausible storyline here is that this was a period when companies were being established and carrying out early implementations, but were not necessarily highly profitable. This appeared to evolve in the 2006- 2012 period however, as the number of companies stagnated but turnover of established companies increased by 90.4% collectively. 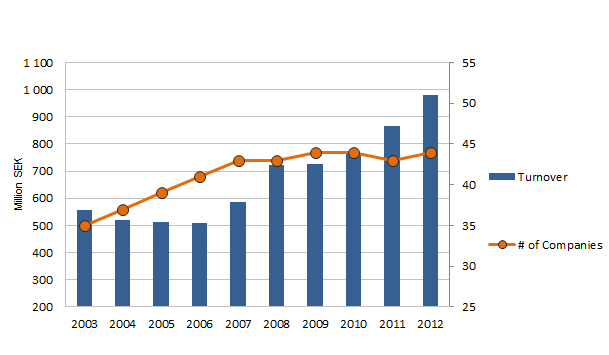 While these findings indicate that clean tech growth has coincided with Stockholm’s eco-district development, it’s certainly not a definitive statement suggesting a cause and effect relationship. So our second step was to conduct interviews with key representatives working at the intersection of clean tech and Stockholm’s eco-district projects. This included Jonas Törnblom, ENVAC’s Director of Marketing and Communications (ENVAC is the maker of automated waste collection systems used in both of Stockholm’s eco-districts). Similar to the other interviews, Törnblom notes the experience the company gained through the Hammarby Sjöstad project was beyond their expectations and has been vital to the company’s success. He noted that ENVAC’s most important benefit of being involved in Hammarby Sjöstad was going from just being seen as a waste management company to now being directly embedded in a larger context of sustainable city development. Following Hammarby Sjöstad ENVAC received the Wembley City Development contract in 2007 and Singapore’s Tianjing EcoCity contract in 2009. Starting from one office in Sweden, they now have 40 offices around the world.

A message to other cities

For other cities, Stockholm’s experiences show that the benefits of eco-districts can go well beyond the urban development domain. The high performance of Stockholm’s clean tech sector in a Nordic context highlights the value of further aligning urban development projects with local, regional and even national green growth strategies. There is also  potential for overcoming the analytical challenges to improve the tracking of these indirect economic impacts of eco-district projects. Here, the institutional learning, networking and communication initiatives that are often directly connected to the projects (for instance GlassHus Ett in Hammarby Sjöstad) can take responsibility for developing and communicating this type of information to policy-makers and other stakeholders as well.

Warming is NOT Cool! Duetting with Al Gore
Measuring urban quality of life - some challenges ...

Survey: Your blog. Your community.

[…] In this blog there are different posts addressing sustainability issues (see this, this and this, to name just a few of them) and myself I’m committed to explore with my research the […]

0 Cancel Reply
[…] In this blog there are different posts addressing sustainability issues (see this, this and this, to name just a few of them) and myself I’m committed to explore with my research the […]
Cancel Update Comment
First Page Previous Page 1 Next Page Last Page