The concept of urban sustainability has been around for many decades, receiving the attention of the whole spectrum of urban experts, sectors and disciplines. It also received  many and different critics while at the political level the concept of resilience started to gain prominence. In this blog there are different posts addressing sustainability issues (see this, this and this, to name just a few of them) and myself I'm committed to explore with my research the linkages, tensions and trade-offs between the two concepts. Indeed, as I've already built here with my previous posts arguing the cities greening fallacy and the tensions emerging when sustainability and resilience have to be alligned within the same (UN) Urban Goal, I'd like to share with you one more perspective linking those concepts to social justice. In doing that I'm co-writing this post with the help of one of my colleagues, Dr. Isabelle Anguelovski, who has contributed in the last years to the international debates on climate justice and was recently awarded an ERC Starting Grant for a research project titled Green Locally Unwanted Land Uses-GREENLULUS.

Notwithstanding the positive assumptions on which both sustainability and resilience rely, some very recent and explorative scientific publication outlined possible paradoxes, trade-offs and social negative implications related to the practices and projects shaping cities through resilience or sustainability oriented strategies. Take the case of Medellin, for instance. In Medellin, Colombia, the Metropolitan Green Belt, a 72-km corridor of green space around the city, is one of the 31 flagship projects of Mayor Aníbal Gaviria Correa. Conceived fundamentally as a planning strategy to consolidate the metropolitan territory in a balanced and equitable way, the green belt is meant to restrain unregulated growth in the hillsides around the city, protect water basins and forests which are key to the region’s biodiversity and to climate control, and most importantly reduce risks of landslides during extreme weather events (see fig 1). 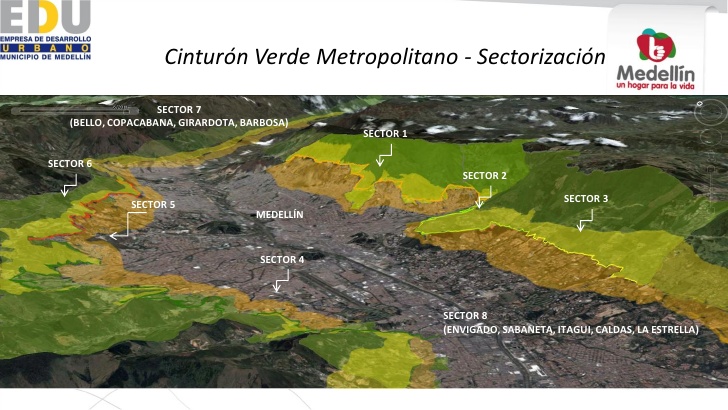 Yet, in trying to enhance urban resilience and protect residents from climate impacts, the project is likely to produce physical and cultural displacement, as well as trauma for the most vulnerable urban dwellers while overlooking social cohesion, community recognition, and livelihoods’ protection. The Green Belt has indeed raised a few planning uncertainties:

First, it is not clear how planned relocation for residents living on unstable terrain and the construction of new high rises for them in a transition zone will be managed: many lower-income residents who originally moved to the hillsides to escape violence during the armed conflict in Colombia are opposed to the idea of being evicted from the houses they built and be moved into city-built tower blocks. The green belt plans would force them to adapt to the rapid, one-size-fits-all urbanization the scheme would create. There is a risk of double trauma through displacement – trauma with displacement from the armed conflict and from the Green Belt project.

Second, uncertainties have also emerged around decisions regarding which communities have to move to allow for the completion of the Green Belt project. Upper-income neighborhoods seem to be able to move forward with the urban expansion towards the top of the hills in the southeastern area (El Poblado, Cedro Verde, Alto de las Palmas) and they are not being displaced even though they have expanded beyond the city border. A number of gated communities such as Alto de Escobero, which is next to important reserves of native forest, with high towers of apartments for the upper classes are continuing to grow without a mention of their need for resettlement. Such housing developments seem to be stimulated by the booming economic sector of private construction in Medellín. In contrast, residents from lower income neighborhoods (Comuna 8) will likely have to move. The city does not seem to be responding for their demands of risk management and risk mitigation projects, with the construction of proper sewage systems and contention walls and integral neighbourhood improvement, that improve housing, common spaces and respective access routes.

Last, a third uncertainty resides in the construction of the monorail, a new longitudinal infrastructure improving the longitudinal mobility in the city, accompanying the Green Belt construction: residents claim that the belt is actually meant for outsiders – tourists and wealthier residents benefiting from easier connections to new recreational areas and parks (such as Park Arvi) around the city that can only be visited when the Metrocable is working. At the same time, low-income residents would lose access to a land they rely on for their livelihoods. For instance, in Communa 8, residents would their community gardens and sources of fresh food. Their traditional way of life would be uprooted through the project.

Not surprisingly, most of the times social negative implications for the most vulnerable groups constitute the trade-offs for enhancing overall and better city services and environment. However, the shift from the classic gentrification concept (related to people displacement due to some urban renewal project-policy) to a new fashion lens by which people displacement is induced due to the application of safety (resilience) and greener (sustainability) principles, is something emerging and that needs further conceptualization and investigation. To which extent, for instance, are sustainability and resilience metaphors used in policy discourses and plans in order to legitimize business as usual practices or social un-justice?

Isabelle Anguelovski is Senior Researcher and Principal Investigator at the Universitat Autonoma de Barcelona (AUB). She is a social scientist trained in urban and environmental planning (PhD, Massachusetts Institute of Technology, 2011). Her projects examine the extent to which urban plans and policy decisions contribute to more just, resilient, healthy, and sustainable cities, and how community groups in distressed neighborhoods contest the existence, creation, or exacerbation of environmental inequities as a result of urban (re)development processes and policies

The future of PhD students in Italian academia. Wh...
Living and moving around in a post-earthquake city

How can cities be kept affordable? A new attempt with rent controls in Germany

Lessons learned from the World Urban Forum 7. Why the new Urban Agenda matters

[…] Anguelovski (Universitat Autonoma de Barcelona) co-authored with Lorenzo Chelleri a critique on the use of the concepts of resilience and sustainability, highlighting the risk that ‘most of the times social negative implications for the most […]

0 Cancel Reply
[…] Anguelovski (Universitat Autonoma de Barcelona) co-authored with Lorenzo Chelleri a critique on the use of the concepts of resilience and sustainability, highlighting the risk that ‘most of the times social negative implications for the most […]
Cancel Update Comment
First Page Previous Page 1 Next Page Last Page